How much land do you need? (free calculator)

Most of my subscribers plan on purchasing some land to improve and farm in the future, maybe even set up a food forest – but often, it’s just a pipedream at the moment.

What’s holding them back?

“I can’t afford to buy land yet. Realistically it will be X years before I can get the finances in place, and I am ready to move.”

Yes, buying land might just be a pipedream right now.

It might be a year or two, or five, until you get your ducks in a row and can start searching for land for real, but here is the thing: you can never be too prepared or too early for a project of this size.

You should think about your plans, how much land you’ll need, and where to relocate, all before you start looking at individual properties. You can do this ahead of time without having money in the bank for the dream property.

And by learning in advance what makes a good property from a permaculture perspective, you’ll be prepared and able to run out of the gate as soon as the opportunities present themselves.

Here is the very first thing you should do:

Figure out how much land you actually need.

(Hint: You don’t need as much land as you think!)

In this training, we’ll calculate it together.

30 minutes from now, you’ll walk out with concrete numbers to help you find the right type of land:

P.S. Here’s what subscriber John had to say about the Land Size Calculator: “excellent mainframe info, very concise. I really appreciate your thorough organization of these considerations.” 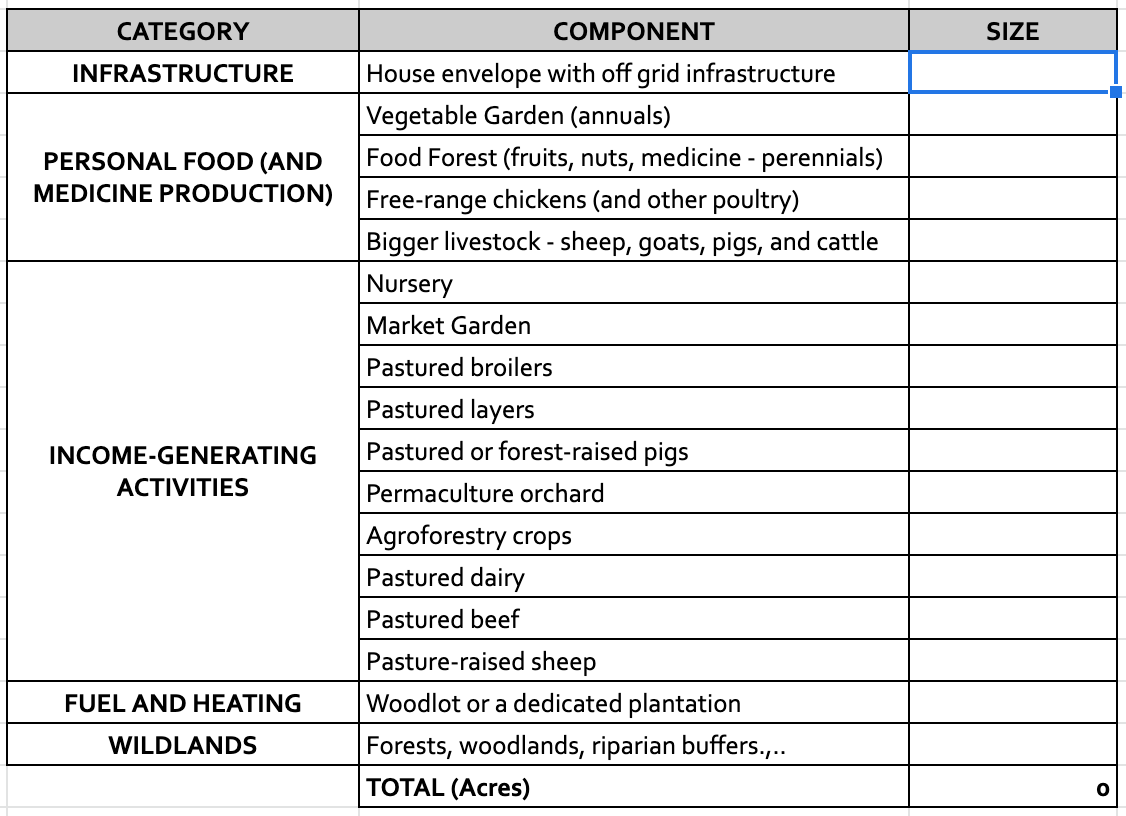 How to make an editable copy:

Step 1. Overall Theme – decide on your intended lifestyle and the overall use of the property. (5 min)

In your calculator, go to the sheet titled “Step 1. Overall Theme”. Now click the category that best describes what you plan to do on your land and make a note of it.

Which of these best describes what you plan to do on your land: homesteading, farmsteading, or farming? 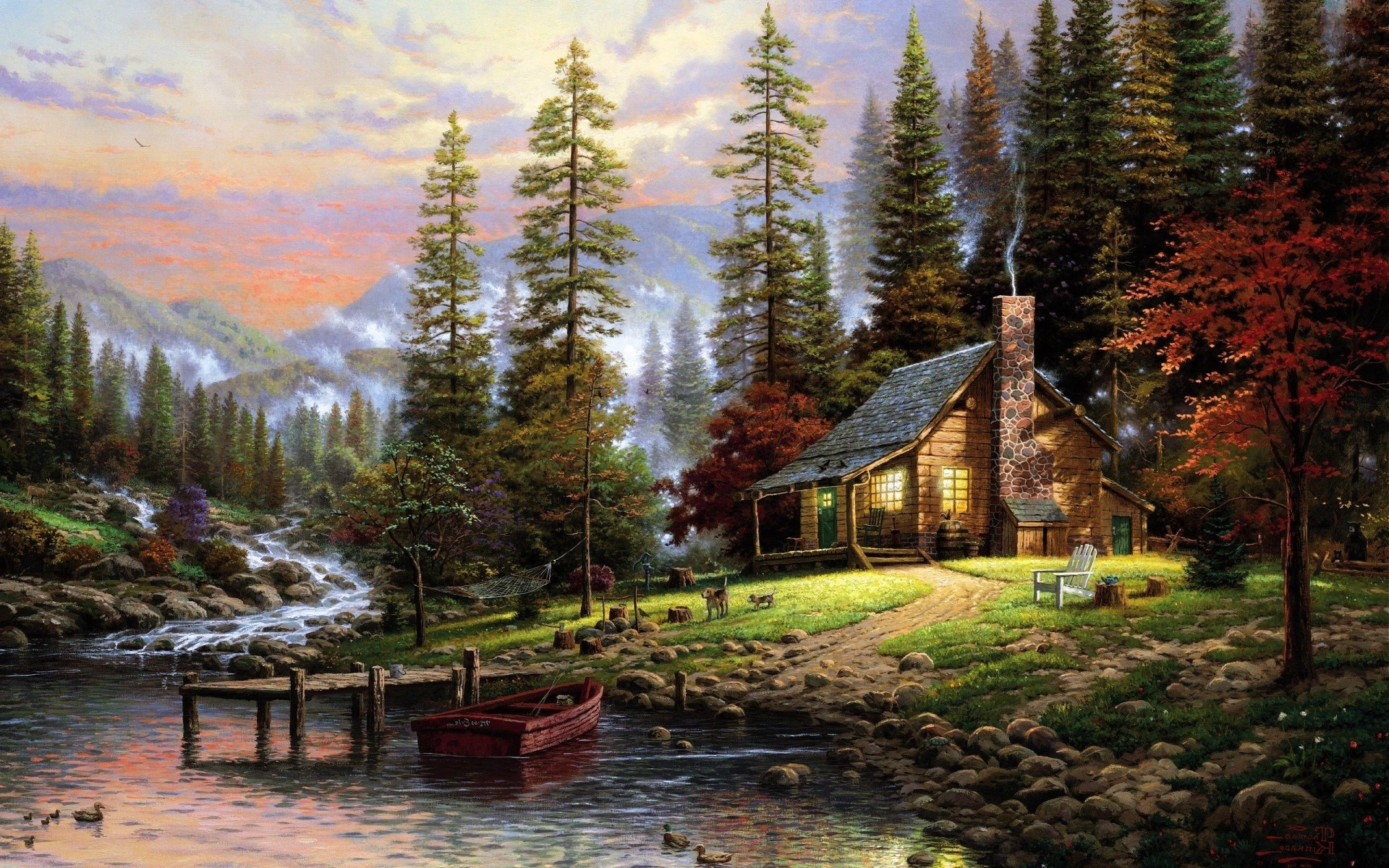 The goal is to be as self-reliant as possible, not dependent on the “grid” public utilities, and, as a homesteader, you strive to utilize the land and its resources for that purpose.

In practice, this means that you grow and preserve your fruit and veggies, raise your own meat and preserve it and that you produce your own power through the use of renewable technologies; solar, wind, and water.

You cut and store wood for heating, grow grains, cut hay for your animals… and so on. It doesn’t necessarily mean that you’ll do all these things, but that you take your self-reliance seriously, and it is a job in itself.

When operating a homestead, you might have a surplus of your products and sell them, but you are not trying to run a business on the land. Your income comes from somewhere else, and you live off the land. 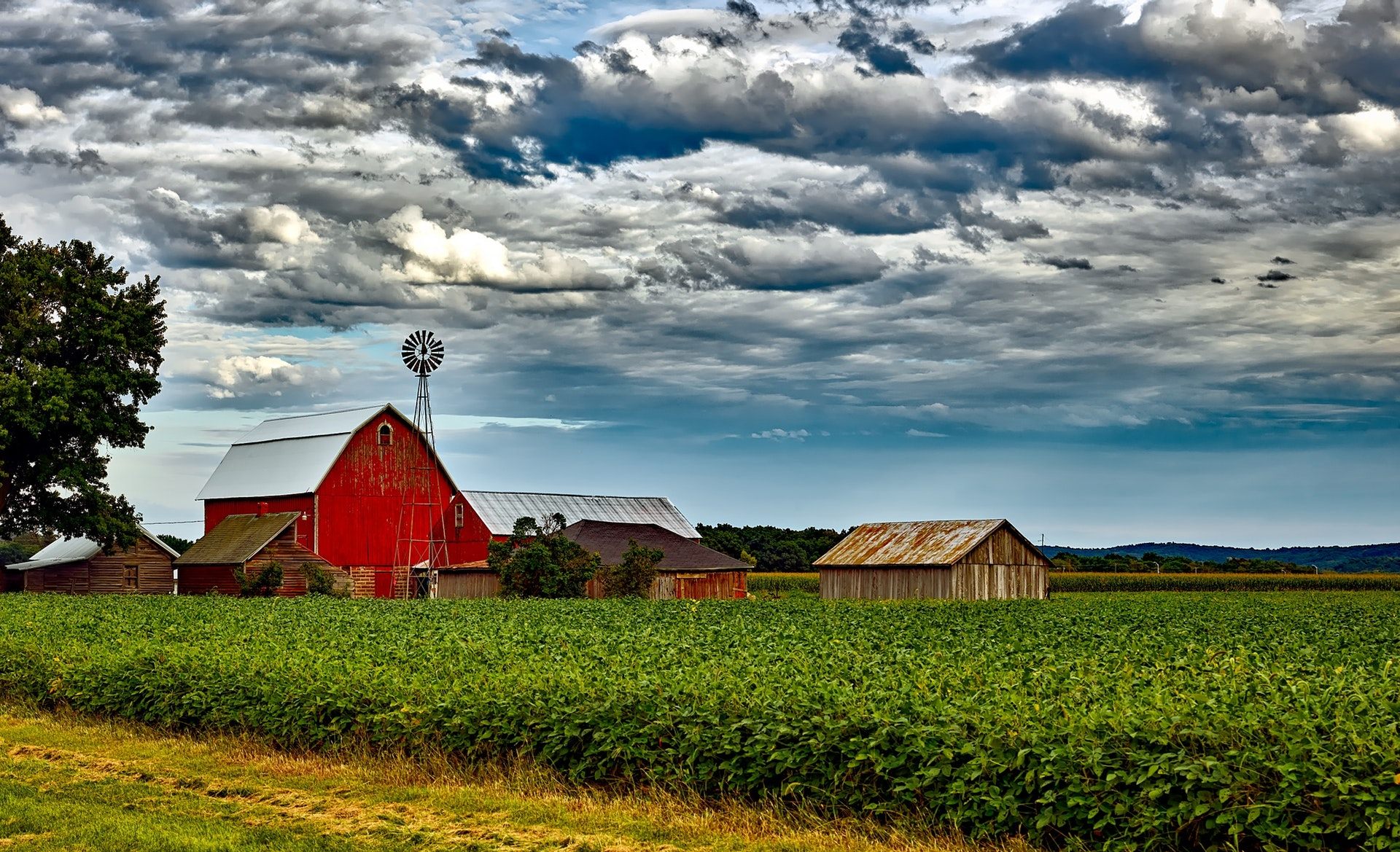 In farming, the core theme is generating money by selling farm products, i.e., making a living off the farm, whether that’s livestock, fruits, vegetables, mushrooms, or other raw materials you grow on the land.

The goal is to create a sustainable income for yourself by utilizing your land. The farm is a business, and you run it that way, creating sales and marketing, most likely having employees, working with apprentices, lowering your inputs and labor costs, and maximizing efficiency and profits.

You can opt-in for different types of farms. For example, you could specialize in specific domains, focus only on vegetable production in a market garden setting, or raise animals such as cattle or perennial crops in a permaculture orchard model. Or you could have a diverse farm based on agroforestry principles and run all aforementioned enterprises together.

The options are numerous, but the point is you depend on your income from farming to pay your bills – although, in reality, you might still have an off-farm job to make ends meet. 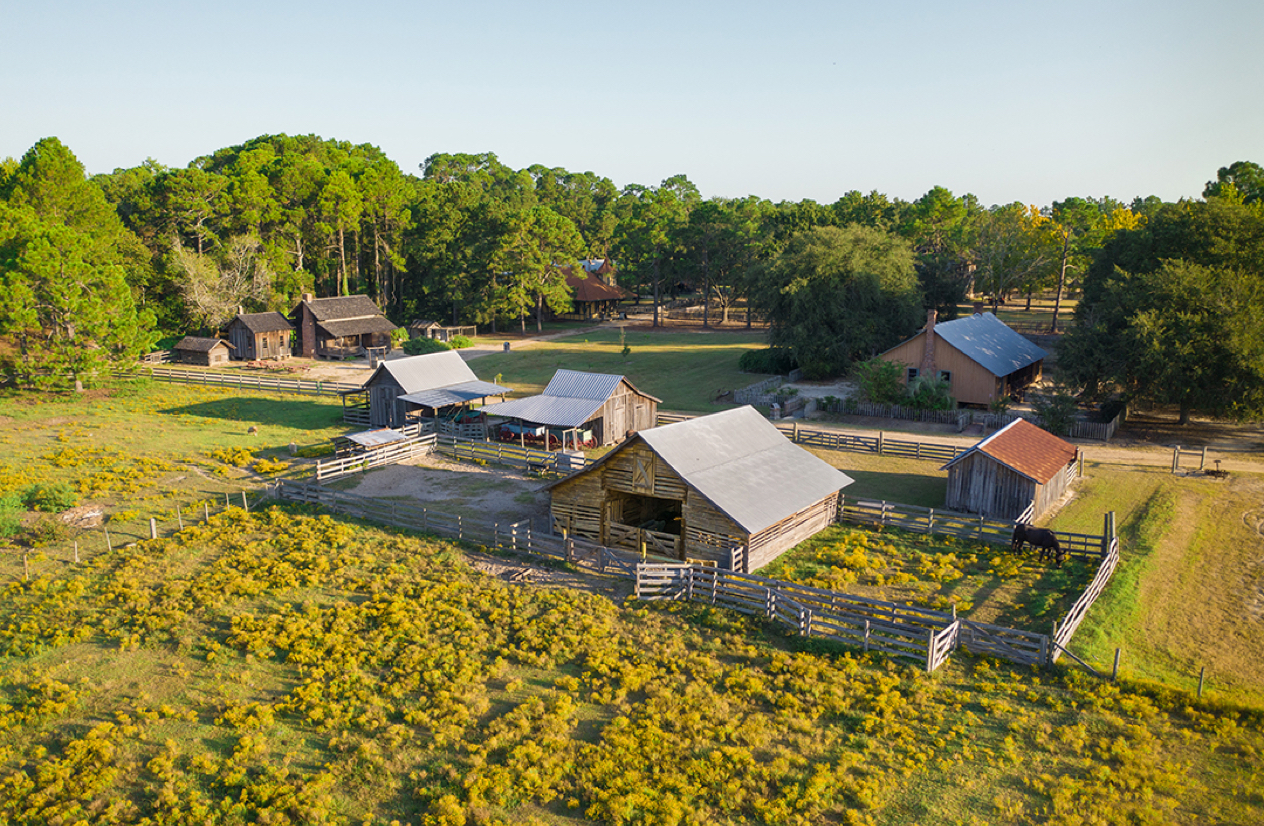 In farmsteading, the core theme is homesteading and stacking some commercial enterprise into your home site. So the goal is, like in homesteading, to be self-reliant by providing for your family’s needs, but you also strive to profit from certain operations on your land.

As in farming, you would run your commercial enterprises as a business, keep separate accounts for home and farm, conduct sales and marketing, and have professional equipment that maximizes efficiency in the production process.

However, given that farming is not all you do, and being self-reliant is a job in itself, you would tend to focus on a specific type of production – whether that’s, for example, pastured pork, high-turnaround vegetables, microgreens, goat milk products, a nursery, or anything else that the market needs. And then, as time and circumstances allow, you might start and stack other enterprises.

Your main income source might be a job off the farm, but the farm “side job” is making you a profit, and eventually, it might become a full-time job as with farming.

Step 2. Land Plan – map out the types of permaculture systems you’ll have on your land. (10 min)

In your calculator, go to the sheet titled “Step 2. Land Plan”. Choose components from these categories that will apply to your situation and context.

i.e. Tick the relevant boxes on the ‘Land Plan’ sheet of the Land Size Calculator:

Once you know the overall theme, we can start defining the systems you’ll have on your land. Each of us has different needs, wants, skills and preferences, so the types of systems we’ll have on our land will be different and unique to our context.

To simplify things, here is a table where we’ll split these systems into five categories and outline the most common components for each. 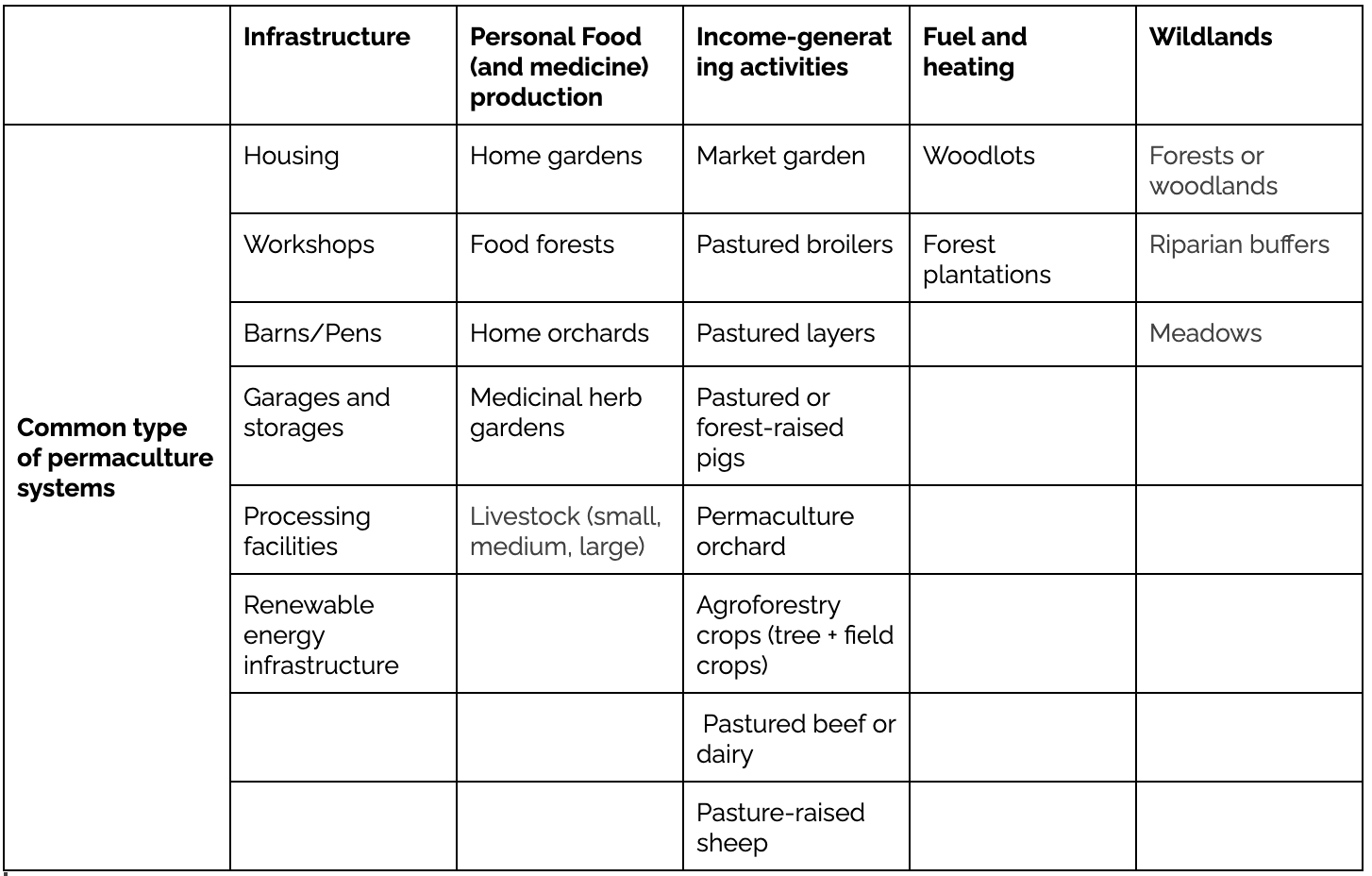 Use this table to define the types of systems you want on your land.

For example, for an off-grid homestead: 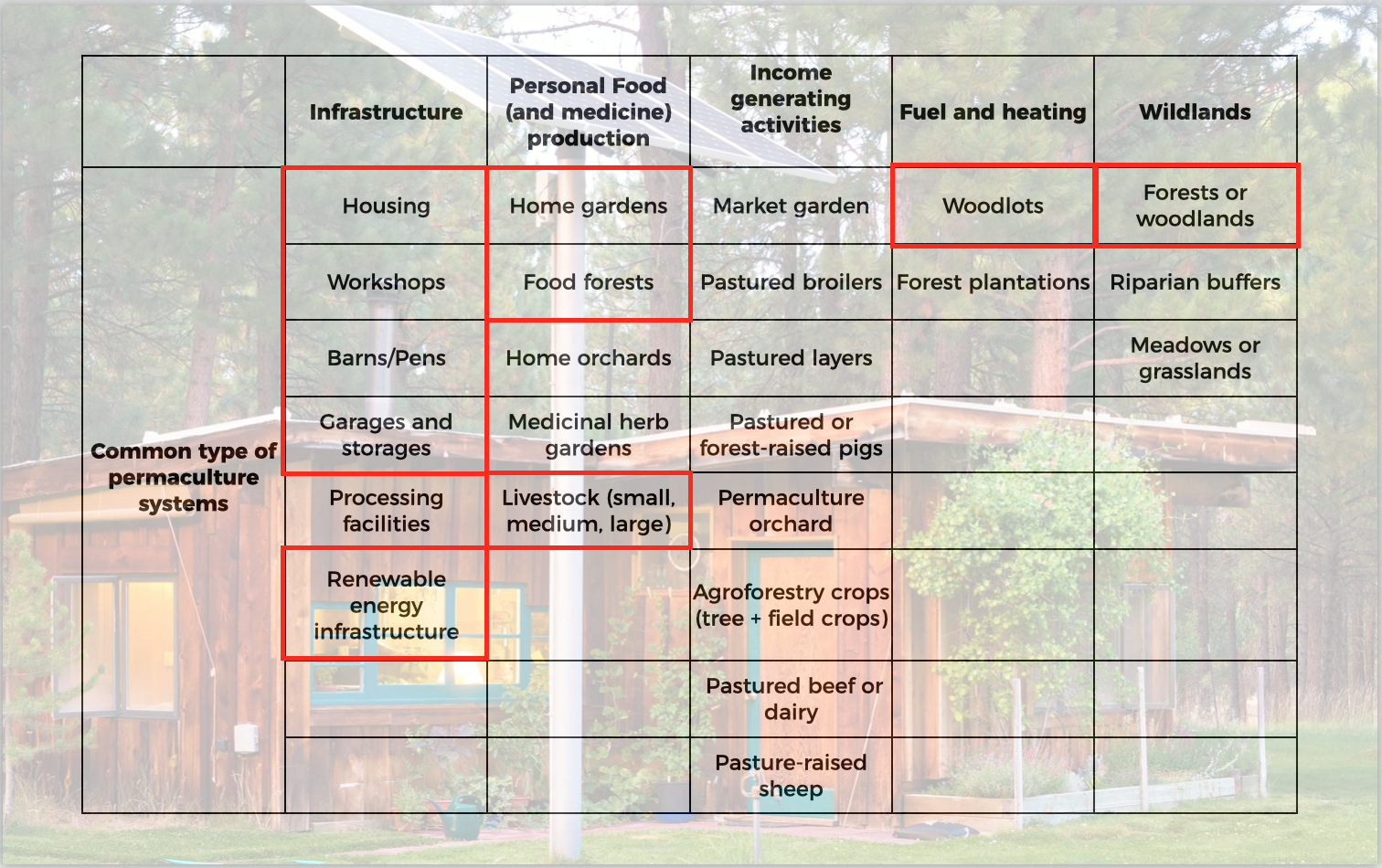 For an agroforestry farm: 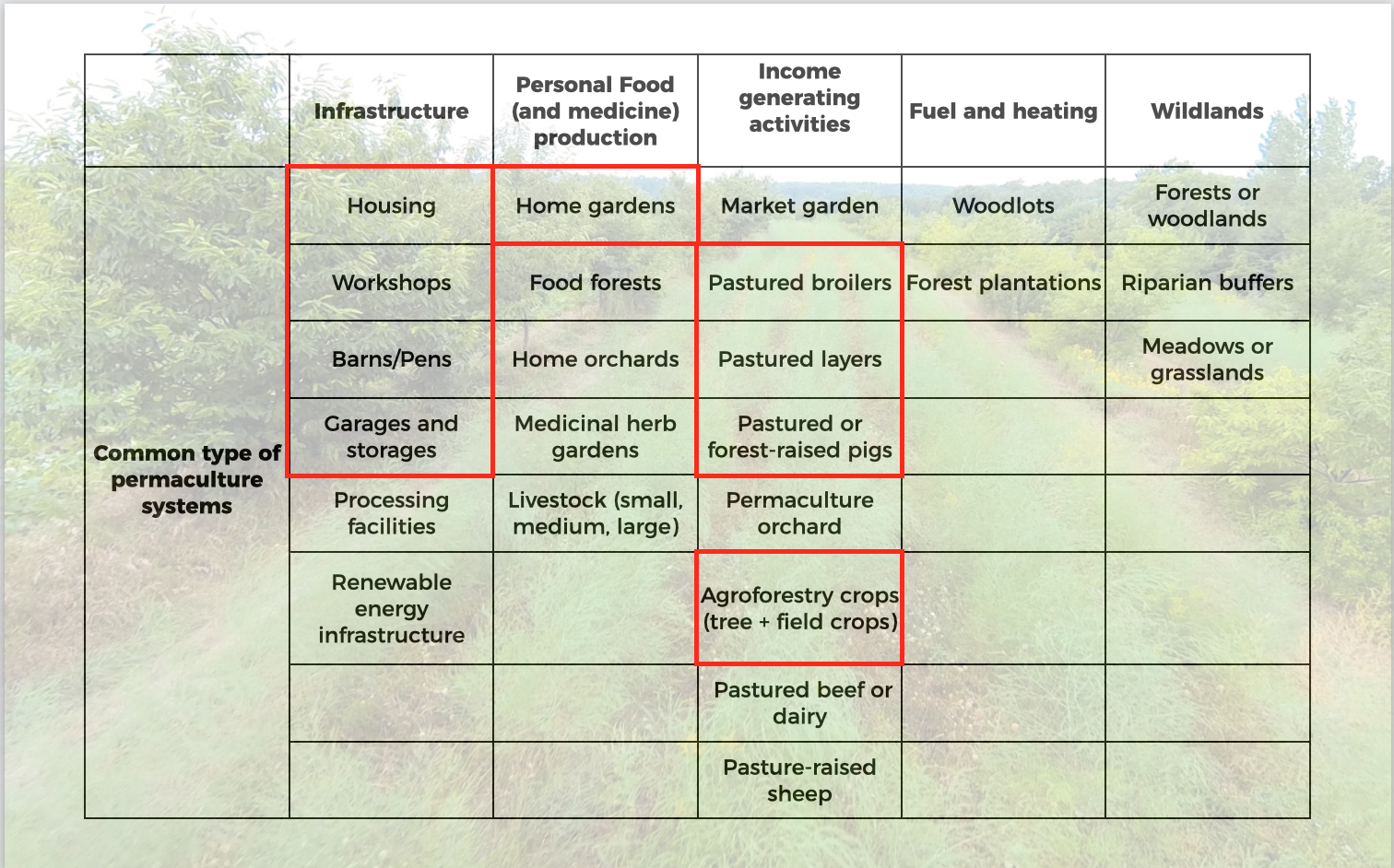 Step 3. Land Calculator – calculate how much land you actually need for your dream based on the overall land use and permaculture systems you selected in steps 1 and 2 (15 min)

In your calculator, go to the sheet titled “Step 3. Land Calculator”.

Use these recommendations listed below and write down your estimated space requirements on the ‘Land Calculator’ sheet in the Land Size Calculator.

When you’re done, you’ll see a screen like this with the final number (as well as a breakdown of the size requirements for each permaculture system): 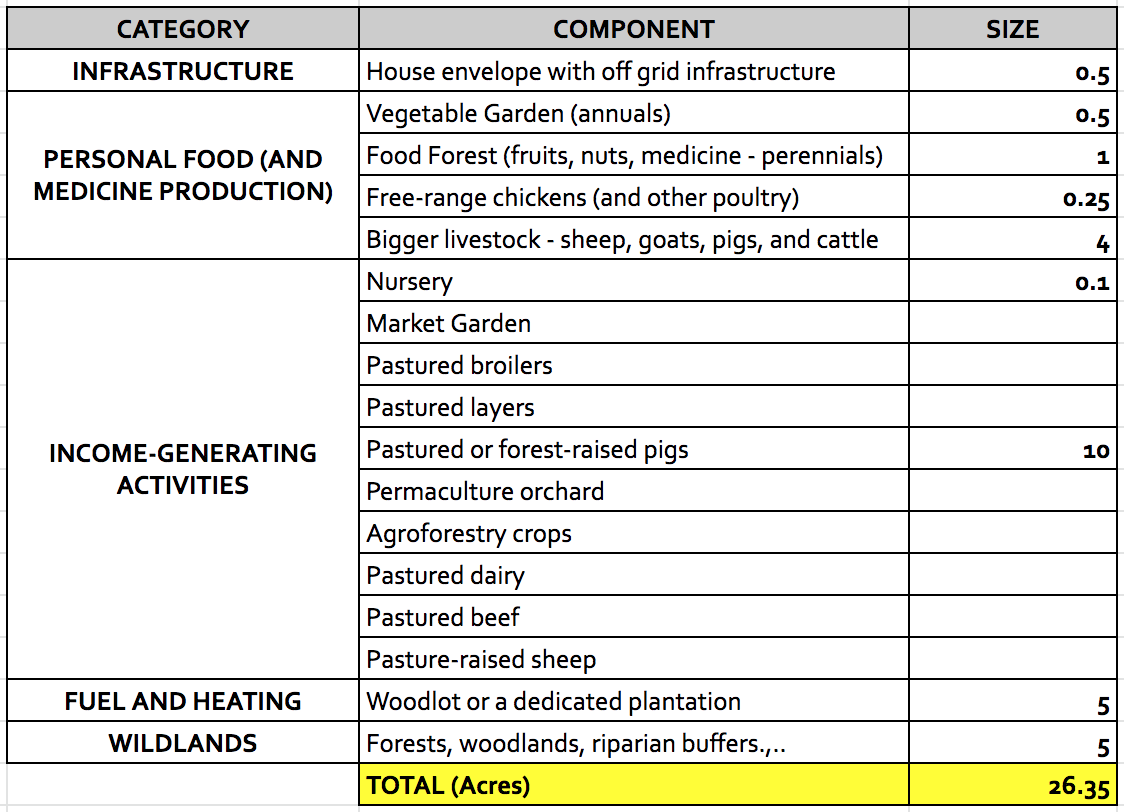 Now, let’s crunch some numbers and get a good guess of the acreage you’ll need for everything you want to do.

Note that this calculus assumes that the land you’ll be looking at is average. It has average soil, an average growing climate, average water availability, enough light for things to grow…

Going beyond the average would need some adjusting of the numbers. For example, you would need less land to achieve the same goals in a tropical rainforest biome and more in a desert or tundra.

​​With that, I suggest you watch this video (which is an extract from my Finding Land course). It will explain the logic behind the land size requirements for various systems outlined in Step 2. You can watch it at a 2x speed to save time.

Below the video, I will create a quick summary of the main points discussed, and you’ll then enter the relevant data into the Land Size Calculator, which will compute everything for you.

-> Housing, outbuildings, and access points such as driveways and parking.

General space recommendation: the whole infrastructure envelope with your house, outbuildings, and access points can be from an 0.25 acres to up to 2 acres of space, with the average infrastructure space requirement being around 0.5 an acre.

Does not need any particular space requirements. It can be fitted on a roof or ground space that the above-mentioned infrastructure components are already taking up.

General space recommendation: 0.25 – 0.5 of an acre is enough space to produce enough veggies for a family of four.

-> Personal production of fruit and nuts, including medicinals – food forest

General space recommendation: 0.25 of an acre to 1 acre is enough space for this type of production.

-> Free-range chickens (and other poultry)

General space recommendation: each chicken needs at most 100 square feet or 10 square meters of space. If you want a flock of 20 chickens to get all the eggs you need plus some meat for the freezer, you’ll need 2000 square feet or 185 square meters of space. This amount of space can be provided by the 0.25-acre to a 1-acre food forest that’s already supplying you with fruits and nuts.

General space recommendation: You’ll need to find the carrying capacity of the region you plan to search for land via the local extension office. And based on that, make guesstimates on how much pasture land you’ll need for the particular type of livestock you plan on having. Some rough estimates on the space needs of various animals for parts of the world with more or less average growing conditions can be seen in the table below.

Note: these are mostly based on the inputs from Richard Perkins’ Regenerative Agriculture book.

General space recommendation: If you want to run a nursery as a profitable enterprise, you can do it on as little as 3000 square feet or some 300 square meters. Count that you’ll need between 0.1  and 0.25 of an acre at most.

General space recommendation: If you want to grow veggies for the market, you can do this profitably on as little as 0.5 an acre, with 2 acres being the maximum amount of land manageable as a single person’s full-time job.

General space recommendation: To raise chickens this way, you would need 1 acre of pasture per 500 birds. Joel Salatin and Richard Perkins recommend that you need some 5 acres of land to make a decent profit on these operations.

General space recommendation:  To raise chickens this way and turn a decent profit, you would need twice as much space as pastured broilers, some 10 acres of land.

General space recommendation: The recommended stocking rates are some 10 – 20 pigs per acre for pasture-raised or half of that for raising pigs in the forest. This translates to 10 – 15 acres of land for this type of operation.

General space recommendation: For a permaculture orchard enterprise, you might need at least five acres of land. To make this scale profitable, you would need to emulate the Stefan Sobkowiak sales and marketing model.

General space recommendation: To gain economies of scale for growing fruit and nuts beyond the permaculture-orchard type of operation, you’ll want to consider some 20 –100 acres planted under tree crops to turn a decent profit.

General space recommendation: The minimum amount of land for what Richard Perkins calls pastured micro-dairy is some 60 acres, which assumes having some 45 animals. On the upper end, a full-size dairy operation with more animals can require twice as much land size.

General space recommendation: According to Richard, you’ll need some 135 acres of land to ensure a decent return on your investment. And this number can be much bigger, depending on the number of animals in the herd you’ll be raising.

General space recommendation: You’ll need a similar amount of land as beef, possibly even slightly more. The recommendation is some 150 acres of land at minimum to make this enterprise profitable.

Everything you learned in this training is premium material extracted from my Finding Land course, which helps you avoid “fatal flaws” and find the right land for your permaculture property.

For two weeks only, you can get the Finding Land course for 25% off, and this VIP discount will only be available to a closed circle of people who are looking for land or planning to do so in the future.

If you are reading this page, it means that you’re eligible.

I will be emailing you the details in the coming days. 🙂