Cover cropping is a site-preparation technique that consists of planting annual or perennial herbs with of keeping the soil covered, suppressing the weeds and improving the soil in many different ways.

Usually, cover crops grow for a set time and then they’re tilled in as a green manure/brown or mowed/rolled over to create a mulch layer. But you may also use them as a permanent or transitional ground cover in your food forest (see below).

There are many benefits to cover crops, they prevent erosion, improve soil fertility, build soil organic matter, suppress weeds, loosen compacted soils, break pest cycles, and provide pollen, nectar wildlife habitat…The actual benefits will depend on the type of cover crop species you use and for how long they grow.

You can use cover crops in your 1. garden, 2. field crops or pastures and 3. food forest.

1. Garden – here we plant green manures, fast-growing plants sown to cover bare soil and rebuild the organic matter and fertility of the garden beds. These are usually sown in late summer or autumn after the harvest and terminated in spring prior to planting veggies.

2. Field Crops/Pastures – here we plant diverse cover crop mixes in order to improve soil and the yield of subsequent crops. These are sown as part of cropping systems and are terminated at different parts of the year as necessary.

3. Food Forest – here we use cover crops as green/brown manures for soil improvement prior to planting trees and shrubs, or use them as transitional or permanent ground covers around already planted food forest trees and shrubs.

How to design your cover crop mix

STEP 1: What are your goals/resource concerns?

There are many cover crops you could use. Therefore, in order to choose the most suitable you’ll need to be clear on your goals and problems you’re trying to address.

Gabe Brown said, “You don’t just seed the cover crops, yoign for what you don’t have.” So think about specific goals/resource concerns that your site has and the current state of the soil you’ll be improving. These can be any of the list below and others that are specific to your context.

STEP 2: Context / my environment – my plan or logistics

Before you select your seeds, buy your cover crop mixtures and sow anything think about the logistics of your project. You don’t want to throw money down the drain because of some implementation/management concern you didn’t account for.

Think about these questions:

STEP 3: Choose your plants and design your cover crop mix

Now you can design your cover crops to address whatever specific concerns you outlined in 1.

There are many types of plant you can use and, generally, we can split them into three groups: 1. legumes, 2. grasses  3. other crops.

1. Legume cover crops such as clovers, hairy vetch, peas, beans, lupins… are primarily used for their ability to fix atmospheric nitrogen (N) with the help of bacteria and add it to the soil. They vary widely in their ability to prevent erosion, suppress weeds and add organic matter to the soil.

2. Grasses such as annual cereals (rye, wheat, barley, oats) and forage grasses (ryegrass, sorghum–Sudan grass) are primarily used for biomass production and weed or erosion control. Because of their high carbon content, they break down more slowly than legumes, resulting in residue (mulch).

3. Other cover crops such as brassicas, mustards, dynamic accumulators can other functions such as (rape and other brassica crops are good at suppressing soil pests), accumulating minerals from the subsoil (comfrey, chicory, plantain send deep roots down seeking nutrients…), production of root biomass…

Some of all these above will also be suitable for attracting beneficial insects.

Use this list to design your own cover crop mix.

General guideline on making the mix:

Now when you designed your cover crop mix you’ll need to find the seed suppliers and place your orders.

If you are not sure where to start your search, here’s a list of seed companies we can recommend. Some of them will have a dedicated cover crop section on their websites.

Note: This growing database is periodically updated, we also accept your recommendations, so if you want to add a reputable supplier click here.

How to sow cover crops on the site

In preparation for your cover you’ll have to do some pre-work, the extent of this will depend on the size of the area and type of sowing method you’ll use.

If you’ll be overseeding/frost seeding into existing low-growing vegetation the prep work is fairly minimal and boils down to cutting, mowing, grazing the existing plants down as low as possible. This will give the cover crop seeds a fighting chance to establish and take over.

In all other you should sow your seeds on bare soil. To do this, you have several options:

Ideally, I would recommend watering beforehand, so the soil is moist, or do the soil disturbance after a rain event. 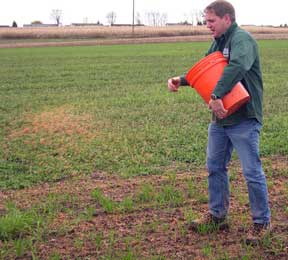 In most cases, especially if you’re cover cropping at a bigger scale, you can leave everything as-is, but if you want to ensure better germination, improve resistance to drought and excess rainfall, and to exclude bird predation…

Note: even without these measures, you’ll still get a good percentage of germination.

Depending on the type of cover crops you’ve sown and your plans you might want to terminate your cover crops at a certain stage of their lifecycle.

Cover crops are usually killed before or during soil preparation for the next crop or next stage of the food forest evolution.

You can, however, leave cover crops growing, let them flower, attract polluters and other beneficial insects, and reseed. However, this way, some of them can become unwanted weeds (especially in the case of buckwheat, ryegrass, crown vetch, and hairy vetch). But on the other hand, natural reseeding might be beneficial in some situations.

If you decide to terminate crops you can:

You are inches away from creating, launching & selling out your own million dollar offers.

Brace yourself buttercup, this will be FUN!

You have Successfully Subscribed!

Gimme your best email to secure your spot on this webinar...